Not having run across any centurions in the family, I went with another aspect of the term.  Endurance, perseverance and resilience come to mind.  How did someone press on through a life situation.

Searching back, my maternal 4th great-grandfather stands out.  John Yost Meetze was born December 2, 1756 in Ederbringhausen, Hesse, Germany.    Stories conflict, but he was a Hessian soldier.  The conflict comes as to whether or not his service was voluntary or involuntary.  I had to do a bit of reading to familiarize myself with Hessian soldiers.  During this time they were commonly sold by their Prince for servitude to King George III of England.  King George felt these approximately 17,000 foreign soldiers, whose allegiance he now owned, would supplement his own weary British forces in the late 1770’s.  There was the thought that German soldiers would have the advantage over British forces who were fighting their own brothers to retain control of the colonies.  Hessian soldiers were told that they were needed to fight Indians who were a threat to the American colonies. Only to find when they arrived they were actually fighting the colonists, some of them of their own German heritage.  The Hessians found upon arriving in America that the stories of an uncivilized society were not true.  Many of the Hessians fell into favor with the German Americans and assimilated into their society.

Writings about grandpa Yost indicate his involvement with the British battle for Charleston.  It’s stated that he deserted the Red Coats in 1782, as they were assaulting Charleston from the Ashley River.  Yost was pursued for 30 plus miles and escaped over Bacon’s Bridge and fell safe within American lines.

I am not exactly sure how the events of the next 30 years of his life transpired.  Grandpa Yost settled in with the German American community of Saxe Gotha, now Lexington County, in South Carolina.  He married Anna Margaret Gross from a neighboring county shortly after separating from his British servitude.  The had 8 children.  In 1812, Yost became an ordained Lutheran Minister.  He was ordained by Godfrey Dreher.  Godfrey is also my 4th great-grandfather, his daughter married Yost’s son.  Yost served more than a half-dozen churches until his death in 1833.

When I think about people living in this time frame I am always amazed by what they endure and where they land.  The information I have shows that Yost left home somewhere around age 20, leaving his parents and siblings behind.  I don’t have any indication that any family followed him to the New World.  He was forced to fight for a foreign land with no common language.  He had the intelligence and guts to decipher the situation and plot his way out.  Who knows, perhaps the whole experience was exhilarating for him.  Maybe the Hessians had heard of the new world and he wanted to go explore.  Or maybe it was hell and he wanted out.  Either way, I am not sure in today’s society that a person would come out unscathed emotionally.  Yost must have been a resilient soul, starting a new life, planting himself firmly in the South Carolina soil.

Even in death, my Grandpa Yost hasn’t been forgotten.  150 years later, in 1985, my mother, Aunt and I took a cemetery hunting trip to South Carolina.  My mom had sketchy notes with landmarks as to how to find the cemetery.  Supposedly the graves were underwater when Lake Murray was built by the Army Corps of Engineers in the early 1900’s. There is a memorial marker at St. Peter’s church indicating that Grandpa Yost and family are under the lake. 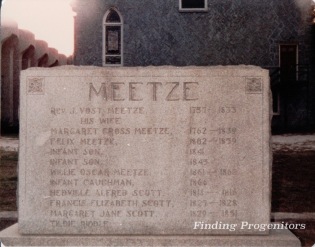 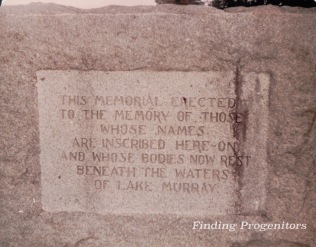 My mother had information to the contrary.  We drove down a dirt road and headed into the woods as her instructions told us.  I remember nearing the water’s edge and looking to the left.  Wire fencing wrapped around wooden posts could be seen, covered with overgrowth. I wish I had been a better photographer at the time.  Inside the fencing, the headstones of Grandpa Yost, Grandma Anna and other family members could be seen. 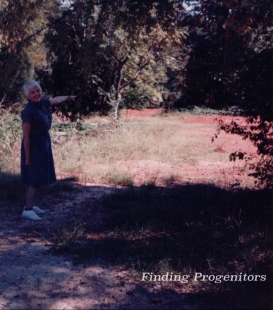 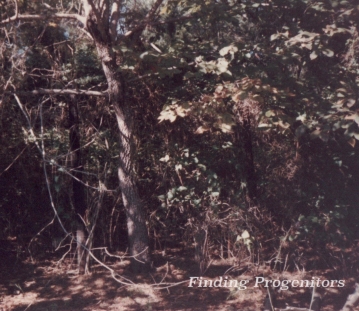 As I am sure I will address in a further blog…..this was a very exciting moment for me.  I have a great fondness for cemeteries, especially uncharted ones.  Mom and my Aunt returned in 1996. They found the area had changed drastically.  The land had been cleared and beautiful homes dotted the shoreline of Lake Murray.  Someone had taken the time to care for the cemetery.  Even surrounding it with fencing. 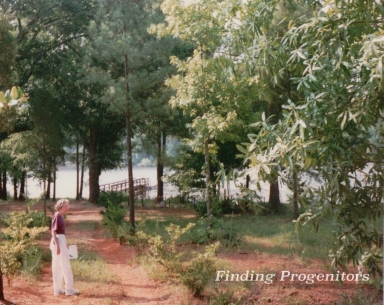 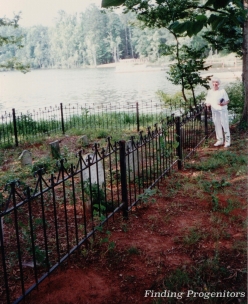 Grandpa Yost’s Find A Grave page has a picture of his headstone, not it’s orginial setting.  Grandma Anna’s is the same.  The photos were added in 2007 and the comments say “was retrieved when the waters of Lake Murray dropped and put on display inside the church”.  Hmmm… 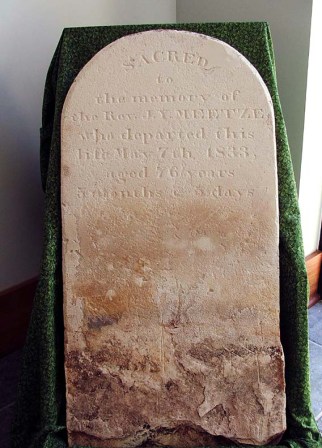 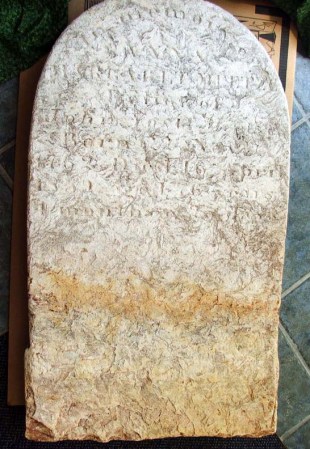 Photos from Find A Grave

I realized when writing this I’m not sure what happened to the cemetery in the past 20 years.  This story is to be continued……   I’ve been in contact with the administrator at St. Peter’s Lutheran church.  She’s got just the person to put on job she says….the local UPS man who has covered that route for more than 20 years.

A tag along to yesterday’s post.  This appears to be a baseball team from Woodruff and Edwards.  circa 1940.  My father-in-law is on the top row, far left.  #findingprogenitors #metzger #woodruffandedwards #elginillinois #elginhistory #foundry #propellers #ww2 #ww2factory #familyhistory #archives #householdarchives #lostillinoismanufacturing @elginhistorymuseum
I love discovering stories behind photos. My father-in-law, Benjamin George Metzger was born in Minnesota in 1916.  The family moved to Iowa before 1920. Ben completed the 8th grade and at some point in the 1930’s moved to live with his paternal Aunt and Uncle in Elgin, Illinois.  The 1930 US Census lists Ben as a “Moulder” at a “Foundry”. And it just so happens our household archives has photos to back this up. Ben worked at Woodruff and Edwards, Inc in Elgin.  W/E, founded in 1867, was an iron foundry that at its peak employed 400 workers and poured 12 tons of iron per hour.  Apparently a close look at antique lamp bases might show the Woodruff and Edwards logo. FB’s Lost Illinois Manufacturing page reports that during WWII, the Navy turned to W/E to produce 300 propellers for landing craft for the invasion of North Africa.  Other foundries said they could only produce 12/day, but the Elgin plant worked round the clock and turned out the order in 3 days! The Army-Navy "E" was presented to firms that excelled in the quality and quantity of their output. The award consisted of a flag to be flown above the plant and a lapel pin for each worker. Very few plants earned this distinction.Woodruff & Edwards earned three stars for propeller castings for picket boats and landing barges; winch drums for Army trucks; motor castings for landing barges and amphibious jeeps. Ben was a part of WWII history in fabricating these items.  He was employed by Woodruff and Edwards for at least the time frame of 1937-1944.  By 1948, he had returned to Iowa and married my Mother-in-law, Eileen. Ben passed away in 1997. The first photo is from 1939.  Ben is the handsome young man in the second row, 4th from the left.  In the second photo, he is on the top row, second from left. #findingprogenitors #metzger #woodruffandedwards #elginillinois #elginhistory #foundry #propellers #ww2 #ww2factory #familyhistory #archives #householdarchives #lostillinoismanufacturing @elginhistorymuseum
I knew this book held some sort of significance to my Mother.  I had heard her and my Aunt giggle about it.  I was never curious enough to read it however.  It’s one of the things I kept when cleaning out her house.  I hadn’t paused to study it until today. It turns out “Strange Fruit” was a best selling novel in 1944.  Translated into 15 languages.  It is the story of an interracial romance and was banned in many places at the time due to it’s “lewdness” and crude language.  Even after reading about the book I still felt it must have held some other significance to my Mother.  Googling Lillian Smith, I found that her life partner was Paula Snelling.  Paula was my Great Aunt’s sister-in-law and  good friend of my Grandmother, Ida.  Both Malcolm and Ida speak of Paula in their letters. Together, Lillian and Paula published literary magazines encouraging writers of all races to give their honest assessments of Southern life, both socially and economically. This was an almost 10 year venture starting in 1936. I’m going to try to hunt down a copy! Now to read the book!.......#findingprogenitors #strangefruit #1944bestseller #bestseller#lilliansmith #malcolmandida
Sometimes I take for granted things I run upon in one of these boxes I pull off a shelf tucked away in my house. This 1919 yearbook from Newberry College in South Carolina is one of them. A quick Google and EBay search do not show another on the market. (No, not planning to part with it) It’s in perfect condition and gives depth to my young grandfather’s time in college. I have no memory of my Grandaddy Kyzer without dress pants and dress shirt and 95% of the time a suit jacket....even on the beach! My memories and photos are of a very polished gentleman. The last photo is my favorite. My Grandfather is second from the right. Crouching, tieless, vest unbuttoned, sleeves rolled up, hair tousled and appearing quite at ease in the moment. Fun to see that side of him. #findingprogenitors #newberrycollege #newberrian #1919 #suitandtie #malcolmandida #seniorclass1919 #grandfather #grandpaincollege #neverknowwhatyouaregoingtofind
Visited the genealogy room at the Halifax County Library today. The library occupies the former town elementary school. I noticed the sign across the street. Pretty sure it’s original. #halifaxcountylibrary #halifaxnc #genealogy #dickensland #charliebrownandlucy #keeptheoriginal
Nestled on my basement shelf between computer programming (which people will one day marvel over) and other couple decade old textbooks, was this. I remember putting it there. My memory wants to say I brought it back from Mom’s a long time ago but I don’t remember anything else about it’s origins. Doing some shuffling yesterday and ran across it. A date inside indicated printing in 1858....naaahhh, can’t be. Well....yeah it is! According to the web it was a popular 19th century schoolbook. Pre-civil war! Ummm. I think I’ll give it a better spot to reside.... #findingprogenitors #cornellsfirststepsingeography #oldtextbook #whodiditbelongto #1858 #precivilwar #precivilwarbook #thethingsifind
Follow Finding Progenitors on WordPress.com
%d bloggers like this: